I love mornings that I do not have to go to school.  I love being able to sleep in until 8 am, waking up to a happy little boy.  He smiles from ear to ear when I go into his room then he lifts his arms in the air letting me know he wants me to pick him up!  After picking up that bundle of cuteness he wraps his little arms around my neck and my day is already made.  I change his diaper that now weighs forty pounds blow raspberries on his belly just so I can hear that belly laugh.  I love being able to feed him his breakfast in the morning (it's the little things in life that make me smile) it's so cute watching him try to feed himself tiny cheerios, but half of them go onto the floor for Odie to eat. I love seeing him lift his sippy cup to his mouth then raising it to get his juice, then holding it way up in the air because he knows this is a huge accomplishment!  I love staying in our pj's all day especially days like this (cold and rainy).  I love the fact our living room is now full of toys (those of you who know me know that I USED to be a neat freak, and I hated when my house was cluttered).  We play on the living room floor, Carter will now sit with his legs spread and sorda in his on little way roll the ball back and forth with me.  When he purposly releases the ball we celebrate by screaming YAAAAAAAAAAY CARTERBUG, and I clap until he claps and he gets this big cheesy grin!  I love that I can read books to him then hold him and snuggle until he falls asleep.  I love that he takes two hour naps and when he wakes up we get to do it all over again!
Posted by kristyd715 No comments:

Happy World Down Syndrome Day!  Today we celebrate all of those wonderful people all around the world that carry around that 3rd 21st chromosome.  Today EVERYONE celebrates! EVERYDAY I CELEBRATE!!!!!!!!  I celebrate Carter, I celebrate the fact that that extra chromosome has brought me so much extra love, I celebrate that I am a proud mommy to the best little boy in the whole wide world! 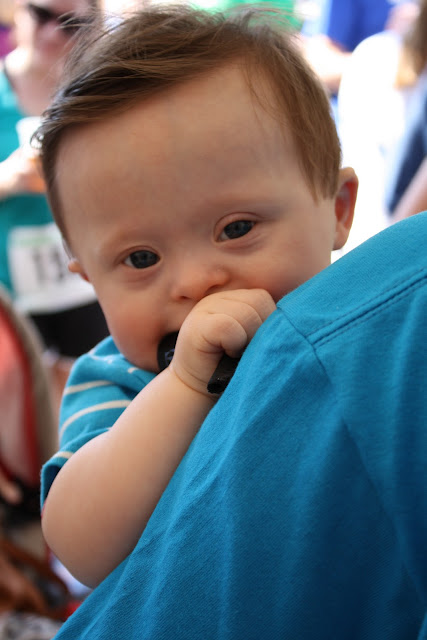 Posted by kristyd715 No comments:

Here it comes, tomorrow Carterbug turns 11 months old...hard to believe.  I have started planning his birthday party...I first thought I was gonna go all out and invite everyone we know, then I decided to have a low key mostly family and a few friends over to our humble abode.  I am excited about his first birthday but I know I will be in tears that entire day.  I still can't believe how fast it has gone by.

So, for a Carter update:  the child can't sit still (I am not complaining one bit but boy am I sleepy at the end of the day).  He is crawling everywhere, pulling to stand, and at times he tries standing by himself without pulling up on an object, person, dog, or whatever else is in the way.  His therapists say he is doing very well. His physical therapist is pretty confident he may be walking by his birthday.  I don't like to put time lines on anything, so I just say he will walk when he is ready to walk.  He has started the crawl with one leg to the side, it freaked me out at first, but his PT said it was completely normal and that he wants to stand up so it is ok that he does that.  He has two teeth on the bottom and four coming in on top!  He has made everything a teether, the crib, changing table, book shelf, you name it he has tried to chew it!  Poor fella all four coming in at the same time is no fun!  We have developmental therapy once a week, physical therapy once a week, and now we decided to add in communication where he will learn signs, gestures and words!  I think it will be really interesting!  He is babbling alot saying mama, dada, and baba. He has discovered the dogs, he really loves to pull their hair to they yelp, but makes up for it by dropping them an occasional animal cracker or a cheerio.  He is eating more solids. We took him to Cracker Barrel for breakfast on Sunday, he had a little bit of pancakes, eggs, and grits (he liked the pancakes the best)!  He thinks everything is hilarious these days...if you laugh at something on tv, he laughs at you laughing, it makes me smile!

I have really wanted to get something off my chest.  It's all about that dreaded word...yep the "R" word!  Now before I get on my soapbox, I am going to go ahead and confess something.  I have misused that word many times in my lifetime, so I am by no means going to sit here and act like I am high and mighty.  Before Carter was born I would use it without even thinking about it.  It has never hit home like it does now.  I hear people say it everyday, and it makes me cringe every time I hear it.  I know people do it out of habit, and people do not mean to say it to hurt people, but you never know who your hurting when your saying that  "R" word.  As a mother I never want my child to be called this word.  I have taken a pledge to help people to be more aware of what they say.  So today is 3/2/11 and it's the day to Spread the word to end the word!!!!
No one can say this better than my friend Erin http://skiingthroughlife.wordpress.com/ please read what she has to say on this issue...her words put mine to shame.  But, I can say let's try this let's stop the misuse of the word.  Take the pledge!  http://www.r-word.org/Default.aspx 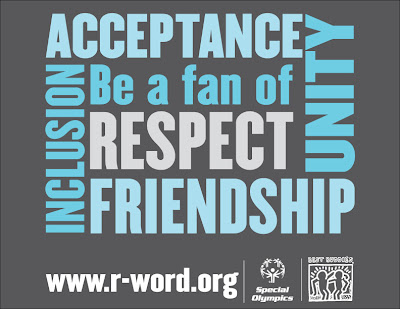 When they were originally introduced, the terms “mental retardation” or “mentally retarded” were medical terms with a specifically clinical connotation; however, the pejorative forms, “retard” and “retarded” have been used widely in today’s society to degrade and insult people with intellectual disabilities. Additionally, when “retard” and “retarded” are used as synonyms for “dumb” or “stupid” by people without disabilities, it only reinforces painful stereotypes of people with intellectual disabilities being less valued members of humanity. -r-word.org
Posted by kristyd715 1 comment:

You made my whole being.

You formed me in my mother's body.

I praise you because you made me in

an amazing and wonderful way

What you have done is wonderful.

I know this very well.

You saw my bones being formed

as I took shape in my mother's body.

When I was put together there.

you saw my body as it was formed.

All the days planned for me

were written in your book.

before I was one day old.

kristyd715
Im married to my best friend! We had our first baby in April 2010 Carter Eli Montgomery. God chose us to have this special little boy in our lives for a reason. God blessed us again in June 2013 With our beautiful little girl Emmy Grace.

A Creed for Children with Down Syndrome

My face may be different

But my feelings the same

I laugh and cry

I take pride in my gains

I was sent here among you

To teach you love

As God in the heavens

Look down from above

To him I'm no different

His love knows no bounds

It's those here among you

In cities and towns

That judge me by standards

That man has imparted

But this family I've chosen

Will help me get started

For I'm one of the children

So special and few

That came here to learn

The same lessons as you

That love is acceptance

It must come from the heart

We all have the same purpose

Though not the same start

The Lord gave me life

To live and embrace

And I'll do it as you do

But at my own pace

To my sweet boy,

I love you with all my heart. I never knew I could ever love anything or anyone as much as I love you. You amaze me each and everyday. I love watching you grow and learn...even though I wish you would slow it down just a little. I want you to have the whole world. I want you to be your own person. A leader not a follower. Never change for anyone but yourself. Love yourself, love others, laugh, be creative, be what you want to be, smile, be happy, experience and enjoy life to it's fullest, try new things, make mistakes, but learn from them, try and if you fail, try again, have life long friends, be a best friend, love and know God, be strong, but don't be afraid to be weak at times, know it's ok to cry, have a big heart, know that it's better to give than recieve, share, pray, learn everything your mind can soak in, love the sunshine and the rain, always be the bigger person, let the negative things in life roll of your back, and let the positive shine through your heart and soul, always keep your head up and remember I'm always here for you! I love you so much Carterbug!